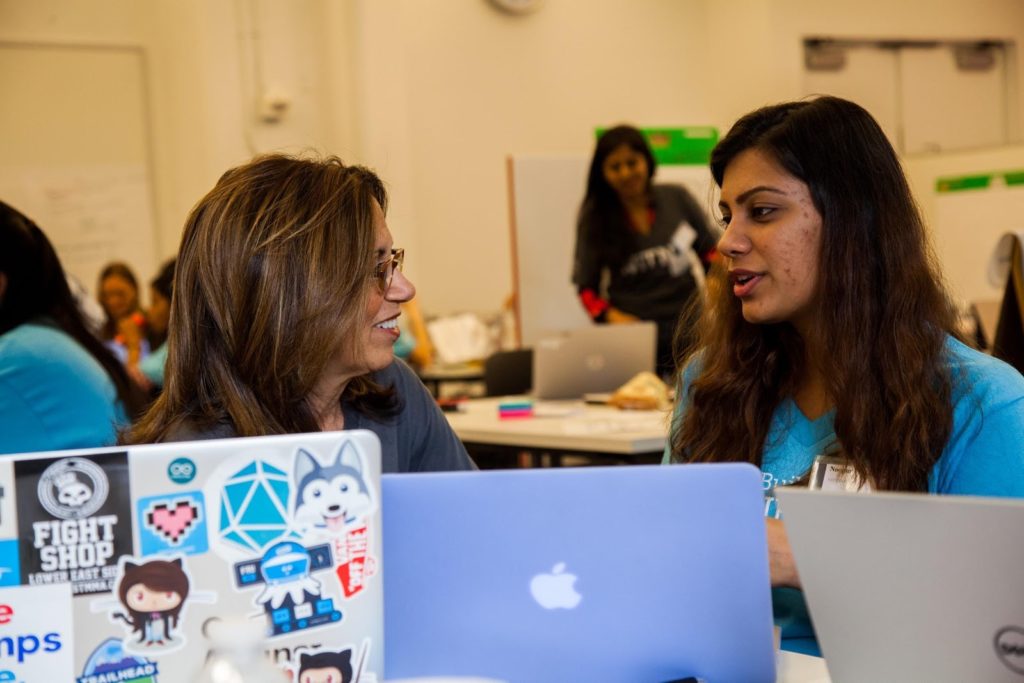 I have been lucky to get to know Judy Spitz, the founder of Break Through Tech, as I have transitioned into the role of Chicago Director of GET Cities. Judy originally founded the organization as WITNY (Women in Tech New York), which focused on graduating women with computer science degrees from CUNY, and is now expanding the program nationally. Break Through Tech is the educational partner of GET Cities and will be implementing their program in Chicago through the University of Illinois-Chicago.

Elle: Judy, thank you so much for taking this time to talk with me today. First of all, I would love to hear about your background and the background of Break Through Tech. Judy: I like to describe Break Through Tech as my second career. My first career was 30 years in the telecommunication industry working for Verizon and its predecessor companies where for the last 10 years I was the chief information officer for one of their three business units.

About five years ago, I decided to take the 30 years of management experience that I had and apply it to the gender equality challenge that we have in tech. That’s how I formulated the idea for what is now Break Through Tech.

Elle: There’s no GETChicago or GET Cities nationally without Break Through Tech. What does that mean to you?

Judy: It is a very fortuitous partnership. When we launched Break Through Tech in New York, we always examined the problem from an ecosystem perspective, or “within a city.”  But more than that it is considering the ‘throughput’ of the pipeline, the supply and demand factors.  There are various points where you can have leaks that get in the way. I had an academic background from my PhD and then my corporate background — and again, I was trying to bring to bear the expertise that I had on both sides. The academic side came as a partnership with the CIty University of New York and the corporate side was the industry of New York City.

We joined forces with SecondMuse under the vision of Pivotal Ventures when we started in Chicago. SecondMuse could help address the environment inside companies once women got there for how they were welcomed, supported and retained. This partnership really brings in a more comprehensive ecosystem model.

Elle: This is a new program in Chicago and many people here are excited about what’s next.  What are some of the learnings from New York City’s programming that you’re most looking forward to evolving in Chicago?

Judy: First, we are building Break Through Tech on the past research of other programs. We’re not the first ones to try to address this challenge and we wanted to stand on the shoulders of giants. The best rates of computer science education and female equality have come from places like Harvey Mudd and Carnegie Mellon University and University of Washington in Seattle where the demographics are different. Break Through Tech is focused on women from under-represented groups: black women, LatinX women, first gen and so on. There are components to replicate from past programs but other areas we need to evolve ourselves.

For example, it’s great to have an innovative intro to computer science class, but if women aren’t registering for that class in the first place then you have a problem. Out of this realization, the Summer Guild was born, which is the summer program for rising freshmen in order to juice up their interest in being willing to take that first introductory class.

Elle: Can you tell us Judy what you’re creating with The University of Illinois at Chicago (UIC) right now, and who’s involved in the UIC community?

Judy: We engage at both a senior administrative as well as academic level. We are working with Susan Poser who is the provost for academic affairs and from an academic side we’re working with Pete Nelson and Bob Sloan who are the dean of the College of Engineering and head of Computer Science respectively. They both have been terrific.

We are also hiring a local team that is dedicated to Break Through Tech and will sit in that department and work with the faculty and students.

We have actually initiated a program at UIC.  This spring, we offered a for-credit, tuition-free Introduction to Computer Science class for rising sophomore women that had not yet declared a major. This is part of what we think of as our ‘cast a wider net’ strategy, meaning get out there and try to catch as many women who might be thinking of computer science. The summer will also include the Summer Guild, which I mentioned earlier.

The fall programming will include things like our career readiness program which helps students get their resumes together, do mock interviews, and get their LinkedIn profiles ready.

I will say I anticipate more research and engagement to fully understand the backgrounds of the students who go to UIC, and the challenges that they have.  Additionally, we already know that in New York it was understood that ‘every company is a tech company’. What I’ve been hearing is that’s not quite so obvious in Chicago.

Elle: My next thought is that people are going to read this and definitely say, “How do I get involved?”

Judy: First of all, people can visit BreakThroughTech.Org and respond to the email link indicating  you are a Chicago-based company or individual that wants to be involved. There is also a local website at UIC.

I’d say that there are three main ways to engage: one is individually volunteer. People who live and work in Chicago can join Java Talk , our mentoring speed dating or volunteer to be a guest speaker in one of the classes that UIC teaches. There are other programs that require a little bit more involvement like the summer program where you’d need to volunteer for a couple of days in a row to be a product coach for a team. For these, we try to get companies to engage and offer this opportunity to their women’s group and send in a team of product coaches for one of the workshops. Clearly, hosting our Winterns is one of our biggest asks. It is an incredibly exciting and rewarding program but  it does require a company to step up to the table. From a programmatic perspective, a Winternship is a 3-week mini-internship offered during a student’s academic recess in January or May. Companies pay the students as they would any intern. The Winternship Program does two things. For companies, It brings students into their environment that don’t normally get in the traditional front door – but because it is a short commitment, it lowers the barrier of entry. Companies get exposed to a group of diverse candidates they wouldn’t normally see. For students, it is transformational as it gives them the resume credential they need to compete successfully for a full summer internship. We absolutely are going to be out there in the Chicago ecosystem talking to as many players as possible from the smallest start-up company all the way up to Fortune 10 companies, hoping to sign on as many Winternship hosts as possible.

Finally, the last way to get involved is to become a sponsor. The more funding that we have, the more students we can support and the more programs that we can run at UIC. So as a local Chicago-based company that’s interested in investing in the students that go to UIC, there’s definitely an opportunity to fund those programs.

Elle: I have one final question. In the last several months,  a light has been shone on the inequity of resources in education nationwide, specifically the “digital divide.” In light of this, what does a call for more and more accessible resources mean for Break Through Tech and why does it make the initiative even more important?

Judy: The current need for remote learning has impacted our students significantly compared to the general population. The idea of everybody saying, “Well we moved our courses online, everything’s great. Everybody can learn from home.” That presupposes that you live in a home where you have some private space. Where you can get online when your classes occur. Remote learning doesn’t work for everyone. The other thing that we lose in a remote learning environment is the exposure to community and the opportunity to network. Many of our students are not getting that anywhere else. They don’t have families that are connected and can introduce them to people in tech. It was a relief that summer internships moved online, became virtual internships instead of being canceled. But the problem is you aren’t meeting  people walking around the halls of a company. So, we’ve been talking to some of our partners about setting up  ‘virtual coffees’ with a senior executive. Even if it’s 15 minutes to introduce themselves, they can reach out later to say, “Remember me, I was an intern that summer.” For more information, visit https://breakthroughtech.org/
PrevPreviousBlack Lives Matter, in Tech
NextLeslie Smith Joins GET Cities as new National DirectorNext 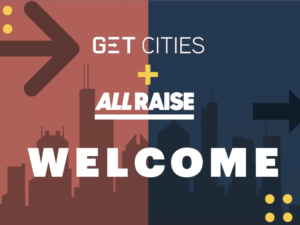 GET ready! All Raise joins forces with GET Cities

Despite the devastating impact that the pandemic has had on a number of businesses, venture capital in the U.S. soared to record numbers in 2020. 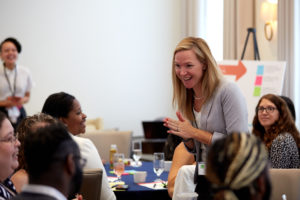 Connecting with our community at the #GETDC Big Think

By Ayanna Smith, GET Cities DC, Managing Director   At GET Cities, our approach to our work is driven by our belief in the power